Novelist, philosopher, teacher – Dame Jean Iris Murdoch was a testament of staying true to oneself, straying from the path of expectation, and loving compassionately beyond conventional boundaries.  She is most known for her books and complex relationship with her partner, John Bayley; however, Iris was also a maverick philosopher and a dedicated fellow and educator at St. Anne’s College, Oxford.  Iris lived a majority of her life in Oxford, building her literature career and nurturing young minds for decades. She is remembered for her tenacity both personally and professionally in her pursuit of understanding the human spirit. Though it has been nearly 20 years since Iris walked the grounds of Oxfordshire, her character will live through novels and moral philosophies for decades.

Born Jean Iris Murdoch in Ireland in 1919, Iris moved with her family to London just weeks after her birth due to her father’s newly acquired civil servant position.  Brought up in a middle class family as an only child, Iris was educated in boarding schools before going on to study Classics at Somerville College, Oxford.  Iris found herself gravitating towards the Communist Party as World War II heated up, although she later abandoned the party. After graduating with highest Honours in 1942, Iris went to work for the Treasury and then the United Nations Relief and Rehabilitation Administration (UNRRA), working with refugees at a camp in Austria for several months.

Iris Murdoch in her matriculation photograph from Somerville College, 1938.

Murdoch returned to the world of academia in 1947 after being awarded the Sarah Smithson Studentship at Newnham College, Cambridge. Philosophy at Cambridge was dominated by logical positivism (the emphasis on using logic to solve philosophical problems), which Murdoch resisted.  She was soon pulled back to Oxford, and in 1948 became a lecturer and fellow at St. Anne’s College.  For years Murdoch was a beloved professor of Philosophy, with many of her students remembering her for encouraging intellectual freedom in her seminars.  Although she retired in 1967 to commit entirely to her career as a novelist, a close relationship with Oxford was maintained through honorary fellowships at both St. Anne’s and Somerville.

Before Iris emerged as a successful novelist, she was a prominent moral philosopher, engaging with the works of Plato and Rousseau. Murdoch’s work in philosophy is often overshadowed by her novels, and deserves greater emphasis; she is known for her existentialist thought, focusing on themes of the Moral Good, freedom, and choice. Writing at a formative time for modern Philosophy, Murdoch resisted the academic climate at Oxford with a commitment to the existentialist idea of individual as a free, autonomous entity that can be “stripped down to a sequence of actions and choices”. This push back against the existing dialogue was brave, and placed Murdoch in an influential category all her own. Murdoch wrote about moral realism in a way that inspired her female contemporaries in philosophy to explore the path she laid before them in the discipline for years to come.

Her first novel, Under the Net, was published in 1954; Iris subsequently published 27 works that were most often well received. Iris was known to present characters with particularly progressive components central to their identity (like refugeehood, toxic patriarchy, or homosexuality) in tender, complex lights. Her thematic messages were subtle, yet powerful; indirect, yet thorough.  In The Sea, The Sea, she explores gender roles, the male ego, and the “social construction of femininity” through her male lead reflecting on his life and lovers.  Praised by feminists, her work has come under criticisms for her idealistic portrayals of queer characters.  Nevertheless, her most successful incorporations of queer identity and sexuality come in The Green Knight, as she writes about intricate male-male relationships, libido, and, most progressively for her time, a normalized homosexual family unit.  In almost all of her novels, the recurring theme of sexuality is conspicuous in one way or another.

Her novels have enjoyed innumerable praise, with some going on to win esteemed accolades like the Booker McConnell Prize to The Sea, The Sea and the James Tait Black Memorial Prize to The Black Prince; yet Iris worked constantly on new novels.  The books she wrote touched the lives of myriads of people because while they examine profound questions about the human experience, they told stories that were accessible.

Murdoch’s talent to write in both literature and philosophy is remarkable because of her ability to produce two distinguishable voices; but her moral and philosophical questions permeate the plots of her novels.  They lead readers to questions like “How do I make myself better?” Murdoch cultivates the idea that we must use our “moral imagination” in order to grasp a more objective comprehension of the world around us.  This anti-nihilist sentiment in which our conscious choices – influenced by the world around us – matter in the makings of who we are and become is integral to the “Murdochian” style.

To say that Murdoch loved fiercely is an understatement.  Murdoch had many great loves in her life, some of which resulted in unimaginable grief.  When her lover Frank Thompson was killed in the war, it followed Iris for the rest of her life.  After her death, the breadth of her relationships surfaced through personal letters and diaries. She had multiple relationships at the same time, all with people she loved at great depths, and seemingly did not endorse the concept of monogamy.  A lover to Nobel Prize winner, Elias Canetti and anthropologist, Franz Steiner, amongst unnamed others, Murdoch’s heart seemed to have infinite bounds in her capacity to love both emotionally and physically.

Iris may never have ‘settled down’ into a lifelong partnership; but then she met John Bayley, a novelist and English professor at Oxford. They met in 1954 and married shortly after, maintaining a loving, albeit unorthodox marriage until her death. Bayley was effectively asexual, finding sex “inescapably ridiculous,” leading Iris to have many extramarital relationships.  Despite Murdoch’s multiple affairs with both men and women, their marriage maintained a quirky intimacy and undying support for one another. Those that knew them recall their relationship fondly as childlike, watching the two of them cycle, giggle, and swim together, seemingly in their own world.  To some, Murdoch was nothing more than a cheat.  To the rest of us, it is much more complicated than that. Iris did not conform to the monogamous expectations of marriage, but who is to say that is wrong?  What Iris had with John Bayley was undoubtedly special, but more importantly not meant for anyone but the two of them to understand.

Murdoch lived out her finals days in her beloved Oxfordshire, under the close care of John Bayley.  Iris died in 1999 from a slow deterioration of the most brilliant piece of her: her mind.  Although Murdoch made it to eighty years old, Alzheimer’s made it difficult to finish her final manuscripts in the final years of her life, ultimately leading her to abandon them.

After her death, John Bayley wrote memoirs about the life he lived with Iris, which went onto be made use in the making of a major motion picture, Iris, at the turn of the new millennium. Though this film is the most mainstream way to learn about Iris, to understand her is to wander the grounds of Oxford, observing the characters she so often used in her novels.  Iris loved to go for a swim in the Thames or a walk through the grounds of Lady Margaret Hall, so much so that a bench in her honor can be found on the grounds.

Dame Jean Iris Murdoch was a phenomenal woman, marching on to the beat of her own drum.  Whether moved by her novels, roused by her sexual liberation, or inspired by the inquiry of what is good and free in her philosophical works, Iris has left a legacy that celebrates the power of individual choice. Iris lived as she philosophized, believing herself to be the captain of her own life and growth through teaching passionately, writing often, and loving always.

Lillie Hinkle is a Master’s student in Refugee & Forced Migration Studies at the University of Oxford.

Anonymous (2015) “Of literature and love”, in The Economist

Jacobson, H. (2003), “My breathless encounters with Iris Murdoch”, in The Independent 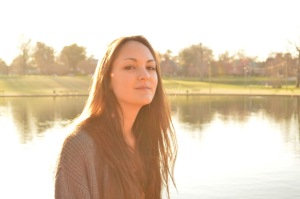 Lillie Hinkle hails from Richmond, Virginia, in the United States.  She is reading for a masters in Refugee & Forced Migration Studies here at Oxford.  When she’s not waist deep in school work, she likes going to art shows, listening to music, and traveling around Europe while the she’s on this side of the pond.

Listen our episode about Iris Murdoch on iTunes or SoundCloud.